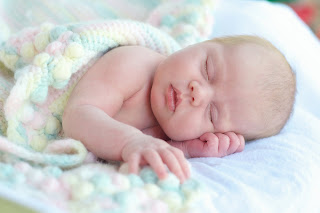 Welcome to the world Kyrie Grace Cullum! Kyrie (KEE-ree-yay) is Greek for "Lord". Our little girl entered the world on November 22, 2011 at 7:48p.m. at Breath of Life birth center in Largo, Florida. She weighed 9lbs 0.5 oz.

It was a wonderful birth experience; our first at a birth center. Kyrie was 9 days late, so I decided (with the approval of my midwife) to take castor oil the morning of the birth. By 3:30 pm the first contractions started. By 6:30 we left for the birth center and 1 hour and 15 minutes later she was born. While at the birth center I was able to hang out in the birthing tub for majority of the time. I am not sure if the water actually reduces the pain that much but it certainly helped me to stay relaxed and let things happen. Kyrie was born in the water. Kyle was able to catch her which brought him great joy. Once Kyrie was born we hung out in the birth suite for 4 hours and then went home. During those 4 hours our children visited and we learned a lot about the natural instincts of a baby and ways to welcome baby into the world. It was a very relaxing and pleasant experience. We also were grateful to be able to come home so early and sleep in our own bed.

The next few days I stayed upstairs in our bedroom resting and taking care of Kyrie while Kyle took care of the older children and household needs. It was so great to be able to have everyone at home and the older children could come up stairs as they wished for short periods to say "hi" to Kyrie, smother her with kisses and see me. A much more pleasant experience than a hospital room setting.

Isaac, Eli and Prema have adjusted very well to having a baby sister. It is joy to see them rise to the occasion in terms of helping me out, being more independent in tasks I used to help them with, and loving Kyrie. There are clearly moments when you see each of them struggling or desiring more attention, but we are so relieved that all 3 are doing as well as they are doing.

Kyrie has been a joy as well. She is plumping up nicely. She didn't lose any baby weight and weighed 10 lbs 2 oz by her 2 week visit.
Posted by MICHELLE CULLUM at 4:29 PM 5 comments:

Isaac completed his 2nd Triathlon this Father's Day weekend. I forgot to bring my camera, so I don't have any personal pictures. However Grandma Cullum had her camera and posted those on another blog. link here.
Posted by MICHELLE CULLUM at 9:00 AM No comments:

This is how every Rocker game starts each day at the Cullum house. (Rockers are the imaginary baseball team the boys have. For their birthday they received "official" Rocker Jerseys and hats which they are not sporting at this time because they are in the wash. Every morning after breakfast the boys go outside to play the Rocker's 1st game of the day. The Rockers believe it or not have won the World Series about 3 times in the last month. Every game has very enthusiastic and loud commentating done by the boys.)

clearly we need to work on learning the words of the National Anthem :) Usually the words are just as jumbled each morning but there is no hesitation between them. Instead they sing the errors with confidence. The camera distracted them a bit
Posted by MICHELLE CULLUM at 5:02 PM 4 comments:

Once we had the dirt up to the right level a plumbing company layed out the plumbing, Kyle layed out the electrical, and Kyle and David layed out the visqueen and the wire mesh. A mason company poured and smoothed the slab. 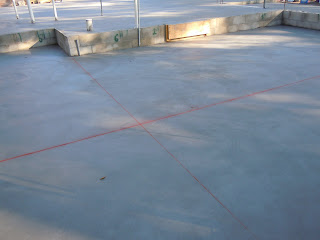 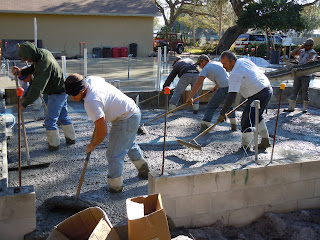 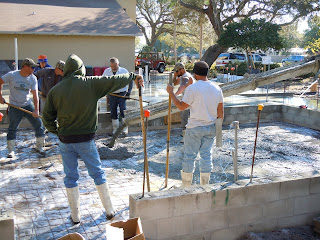 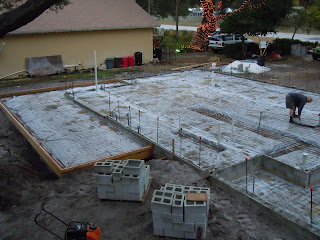 Once the footer is poured and dried we had to remove all of the footer forms (wood). Then we had to dig through all of the sand that was "inside" the house. Since this lot has a lot of oak trees we had to remove all organic material (tree roots, etc) so that as the years pass the dead organic material doesn't leave air pockets which would lead to our slab sinking in places. Some people would just get rid of the old dirt and not do this sifting process, but that is not as cheap. Once we cleaned out all the exhisting dirt the footer wall built (not by us). Once the footer wall was set up we spent weeks pouring and compacting new dirt up to the appropriate level for the slab. The kids were fantastic with helping out with this entire process. They pulled out roots, they ran the compactor, the threw dirt, etc. 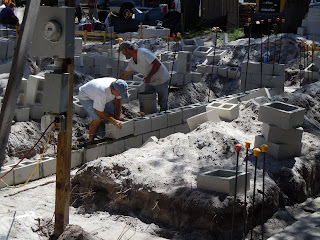 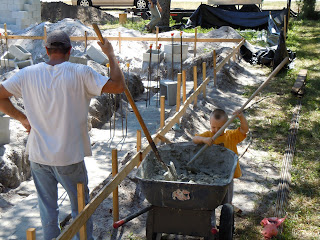 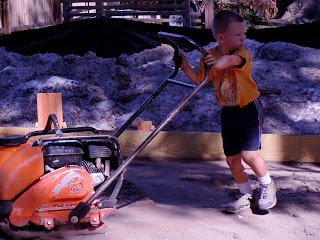 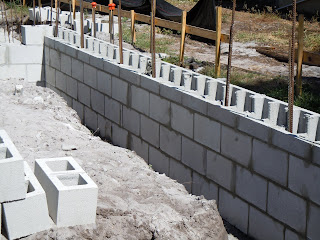 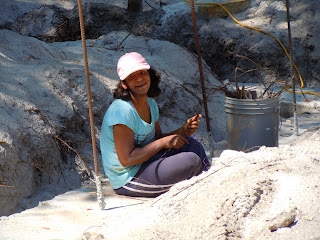 Posted by MICHELLE CULLUM at 4:34 PM No comments:

Building a strong foundation in Florida is quite different than what I was used to living up north in Wisconsin. As you can see our soil is sand. And our water table does not allow for basements. Therefore the first thing you build for the foundation are the footers. Since our soil is pure sand we had to use the wood to keep the sides that were dug from caving in and then you set up the rebar in the footer cells. We thankfully did not do all this work ourselves. 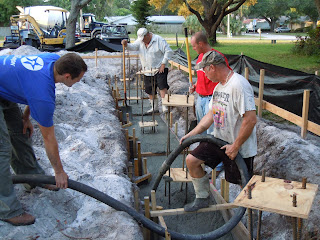 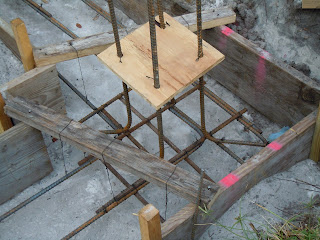 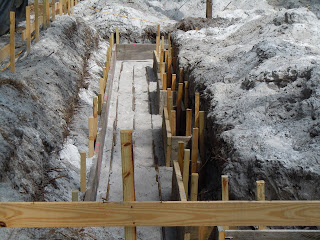 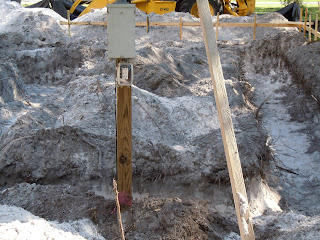 Posted by MICHELLE CULLUM at 4:19 PM No comments:

We have been busy building our new house. We started in September 2010. We have had our entire family and extended family, sub contractors and friends help in the process. I don't have time to write down more details so instead I will spend the time I do have uploading photos for viewing. Thank you to Sandy for taking documenting the building process in photos.

Kyle and I both love Bungalow homes so this home has been an attempt at a comtemporary Bungalow.

The west side view--shows the beginning of the back porch 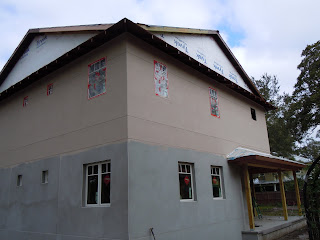 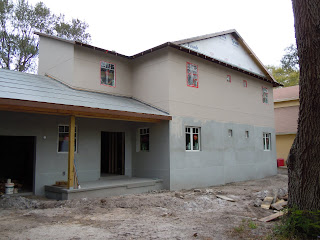 EVERY American should educate themselves on the United Nations Convention on the Rights of the Child and its impact on the Parental Rights of Americans.

The treaty can affect our right as American parents to decide our child(rens) education, religion, discipline, health care, etc. Instead that right is given to the government and the children themselves, but ultimately the government.

Little House on the Prairie

As I type our family is sitting down for our weekly (sometimes bi-weekly depending on the weather and the adults exhaustion level) Little House on the Prairie family viewing. Pa looks handsome as ever. Ma is graceful and beautiful. Mary is the typical first born aiming to please and excelling in everything. Laura learns life the hard way and in her own way. Carrie is sweet and cute. Nellie Olseon is mean and bratty as ever causing you to wonder however did her father manage living with her. Mr. Edwards always brings a laugh.

For my birthday in October I received the entire 9 seasons of Little House on the Prairie DVD set. I was a big fan when I was little and became a bigger fan when I began reading the book series to the boys. I am close to a fanatic now talking about LIttle House episodes with my mom friends and eagerly anticipating the next time I can sit down and watch an episode. Kyle and I spend several nights a week watching the episodes together before bed so that we can decide which episodes we will allow the children to watch.

Our family loves watching Little House on the Prairie for many reasons.
good morals and character displayed
The whole family (including Prema who can't hear and can't read the subtitles) can enjoy and understand what is happening in the show.
as we dream about slowly growing our own homestead, our kids see first hand hard work done in chores
the kids get to see the "old ways" of doing things
every episode is so relaxing to watch
real life situations are played out for our kids to see and we can discuss
one room school house with classical teaching which is how we homeschool
Posted by MICHELLE CULLUM at 4:35 PM 2 comments:

Half Finish.. Can You Find Us?

Click on the link to see video and photos from the race. I believe they must have taken pictures when we crossed a time mat and then they send photos that were taken at the time you crossed those areas hoping have caught you on film.

I completed the Disney World 1/2 marathon (13.1 miles) today with my sister-in-law Amber Cullum. We finished in 2 hours 31 minutes.

We drove to Orlando on Friday afternoon and got our race numbers and t-shirt and timing chip at ESPN Wide World of Sports. Kyle's parents, Sam and Amber with their 9 month old son Bennett, and Kyle, I and the kids stayed at a hotel in Orlando for the night.

Sam, Amber and I woke up at 3:45 a.m. to get ready. Sam was our chauffeur driving us to the race with the intention of going back to the hotel and coming to spectate with the rest of the family. Traffic was so backed up trying to enter the park that Amber and I got out of the car earlier than we had planned. We ended up crossing a wet drainage ditch and getting our shoes and socks wet, but we were able to use the bathroom a few times before we arrived at our starting corral just as they were singing "The Star Spangled Banner".

The official start of the race was 5:35 a.m. We were in the 5th starting wave so we started about 6:00 a.m. With each start Disney put off a fireworks and Mickey and Minnie Mouse, Donald Duck and Goofy cheered the runners on in their own running suits. 27,000 plus people were in the race. The entire race was a "sea" of people.

Some highlights of the race were:

- We saw Sam at the 1.5 mile. He has gotten stuck in traffic and wasn't able to leave the park.
- High School bands played in the start and finish where it was only woods and road.
- Running through through Magic Kingdom on Main Street and through the Castle.
- seeing all the Disney characters throughout the race (runners would stop and stand in lined to get their picture taken- we didn't)
- passing Al Roker from the Today Show. He and Meredith Vieira were running the race. We passed Al about mile 7 I think.
- walking times...we ran 10 minutes and walked 1 minute throughout the race. I needed the walking portions especially at the end.
-doing the race with Amber. I am happy she invited me to come. I never had run more than 3 miles that I can remember before the training. It is something I couldn't have done alone. It really helps to run with another person.
- seeing so many people running. Disney's Marathon was not cheap, but it is nice to see that it does motivate so many people to be healthy.
- FINISHING...I become overwhelmed with emotion and started to cry a bit. I couldn't believe I had finished. My legs were aching since about mile 8, so those last 5 miles were really hard.

The rest of the family never got to join us. Too many roads were closed and there were not that many places where family and friends could view the runners. Instead they stayed behind at the hotel and explored the area there. Sam was able to see us again at the 12 mile and finish.

Unless you are a HUGE Disney fan, which I am not, I wouldn't suggest ever doing the Disney Marathon mostly due to the cost and the really early start. However, I would suggest trying to do a 1/2 marathon especially with a friend or relative. It feels good to accomplish something you never thought you could do.

Sam has a few pictures I will post when I get them.
Posted by MICHELLE CULLUM at 2:22 PM 5 comments: